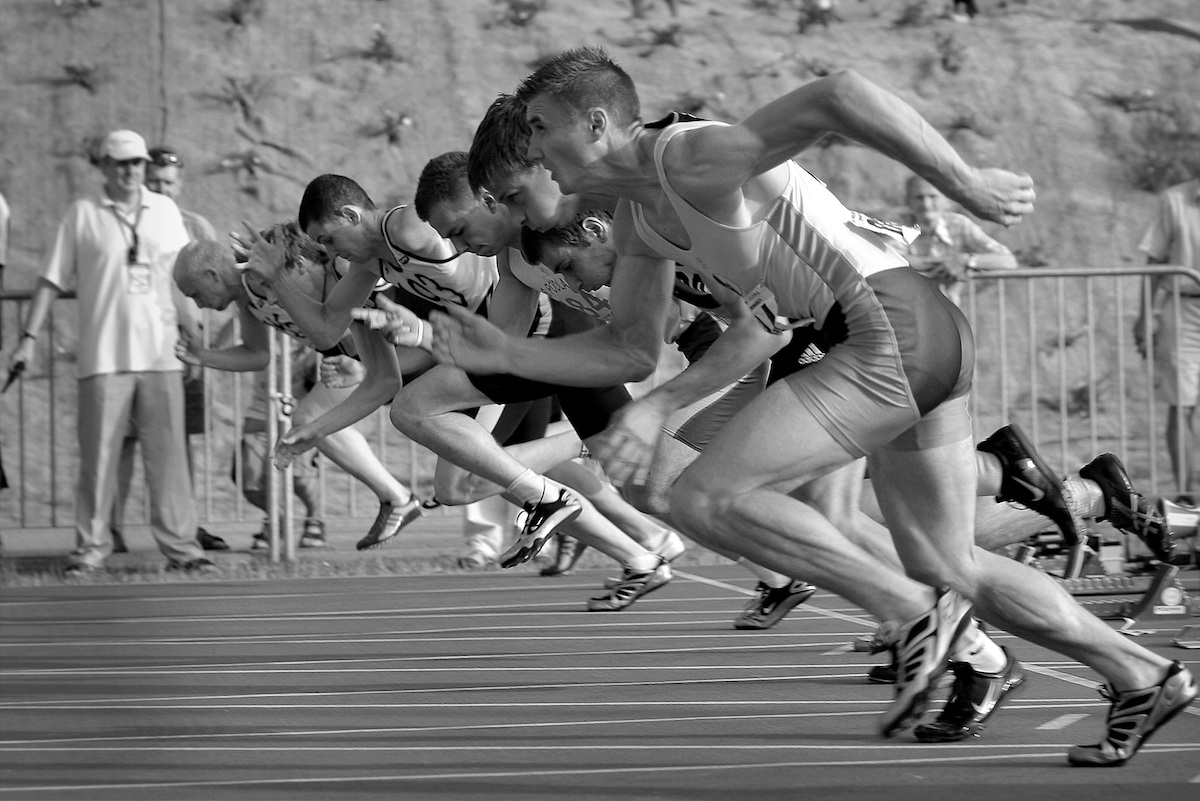 In a sport as old as humanity itself, a sport known in Europe simply as “Athletics,” there are few opportunities for originality. For years now, track & field in America and around the world has been suffering a siege mentality induced by lack of funding and real support to athletes. It’s a sport where undue sponsor influence decides event outcomes. Increasingly incompetent or, worse, irrelevant governing bodies flagrantly ignore the best interest of the sport and its athletes in favor of shoe sales. A nationwide declining fan interest pervades and an ever accelerating culture of drug, doping and cheating scandal permeates the very air we breathe. Sadly, even the International Olympic Committee is considering reducing the number of track events for which they award medals.

Amateur participation is up, but how many bucket-list marathoners can name the national record holder at 1 mile? How many have been to a big meet to watch a 1 mile footrace? How about any other distance? Used to be events like the Wannamaker Millrose Games would sell out Madison Square Garden months in advance. Now, the crowned jewel of indoor track has moved way uptown to the old Armory. A great place to run, to be sure, but not nearly the coronation of American running it used to be. Long the largest annual track event in the country, and despite large attendance every last weekend in April, the Penn Relays has been reduced to almost cult status in the sporting news across the country.

Even among passionate fans like myself who crave it, there often seems little hope.

But, every so often

Once in awhile, something so intriguing and ridiculous comes along, a marketing opportunity so absurdly fantastic, an athletic event so joyously weird, it gives fans a legitimate reason for celebration.

Such was the case of the first-ever Beer Mile World Championship hosted by irreverent and passionate online track video journal Flotrack, and held ignobly on a formula one racing track this December 3rd in Austin Texas. The event was a huge and original success. It was covered in the mainstream sports and news press and media.

A recent history of records thrown into question and elites versus unknowns gave rise to interviews that smacked of the WWF of the 1980s. Elite athletes called out the current world record holder for not showing up to compete as evidence that his record was illegitimate.

A last-minute venue switch was blamed by at least one competitor on a rival track & field news website. World records were broken and challenged. Fans cheered. Elites and amateurs alike, competed, with aplomb and joy. New and engaging sponsors like Hops & Grain Craft Brewery from Austin and Kill Cliff Energy Drink from Atlanta made a big splash in a sport where you normally only see running shoe companies positioning themselves against each other.

It was a ridiculous, fantastic and joyful event that injected a new energy into the sport – at least for a night. And it was good for all of us. Good for running. Good for sponsors. Good for the sport.

What is the beer mile? Find out here >>

How did the event come about? Find out here >>

Code blue for a dying sport?

Is Flotrack and it’s Beer Mile World Championship the savior American Track & Field has been praying for? No. But it is one unique event that could spark an interest beyond the high school and college track crowds. It could raise the profile of the sport we all love.

American Track & Field and the greater sport of running – road running, cross country and field events – need an infusion of personality and passion.

Track & Field had a following once

Frank Shorter and his mustache ran through the streets of Munich in 1972, snatched a golden moment from a tragic and troubled Olympiad and handed off the baton to Boston Billy to energize the running boom of the 1970s.

Then, Fred Lebow gave birth to the New York City Marathon as we know it today.

Steve Prefontaine ran out of the Oregon woods to become know by three simple letters – Pre – and inspire multiple generations of distance-obsessed kids to tie up a pair of Nikes. Along the way, he inspired many legendary training stories, occasionally true quotations and flamboyant facial hair.

Before his unfortunate brush with the plastic surgeon, Bruce Jenner became the greatest athlete in the world and inspired a nation to run, jump and throw from Montreal’s Olympic Stadium.

Eamonn Coghlan graced the cover of Sports Illustrated multiple times under his nom de plume. His spectacular kicking finishes in Madison Square Garden made him known beyond the niche world of the indoor track circuit as the Chairman of the Boards through the late 70s and 80s.

Gary Fanelli’s personality exploded out of his world class chest in marathon after marathon running road races across the nation and around the world as Elwood Blues, a New York Met in full uniform and any number of other absurd and joyous characters. The sport of running needs more Gary Fanellis.

All of this was covered at the time in the mainstream U.S. media and on television, too. These were huge names in our sport, but more, they were covered all over the mainstream sports media and discussed around the water cooler on Monday morning. Who else remembers Dwight Stones coming out on top of a Millrose Games high jump competition that didn’t finish until 1:00a.m.?

ABC’s Wide World of Sports would cover track nearly every week throughout the summer time. Americans watched enraptured and nostalgic for Dr. Roger Bannister as the mile world record was driven faster and faster by the Coe/Ovett rivalry in 1980, 1981 and 1982.

The first Fifth Avenue Miles were won in 1981 by Sydney Maree and Patti Sue Plumber with more than a million fans lining the avenue cheering themselves horse. Many not knowing even a single name in the field.

Lost to history – or not

The authentic energy that once existed in American Track & Field is now a thing of the past. Without the marketing budgets of the NFL, NBA and MLB, not to mention the over-produced spectacles of college football, March Madness and the other “major” sports, some say Track doesn’t have a chance. So much of the momentum of the running boom was killed by a disingenuous view of amateurism and a misguided boycott of the 1980 Olympic games, but it’s not sufficient to lay all of the blame there.

Honestly, with the current lack of vision at the USATF, the governing body of Track & Field in America, I don’t see it getting better any time soon. But that said, events like Flotrack’s Beer Mile World Championship could hold a key to opening up a wider audience.

Tennis was never more popular than in the days leading up to Billy Jean King’s notorious  Battle of the Sexes match against Bobby Riggs in 1973.

The six day bicycle races held throughout the 1920s and 30s are still some of the most popular – and weirdly unique – events in the history of the old Madison Square Garden.

The history of baseball is filled with stories of unique minor and major league promotions designed to get fans out to the ball park.

Basketball has the Harlem Globetrotters.

Again, is beer the savior of track & field in America? Is Flotrack’s beer mile event going to revolutionize the sport we love? Probably not. But we all, fans, organizers and athletes, all, need to start rethinking our relationship with our sport. I’m about as big a traditionalist as there is when it comes to sports and sports history, but someone tell me what’s wrong with using unique and fun events to drive fan interest and make our sport a touchstone once again?